One such was Chung Ling Soo who became one of the most celebrated magicians of his age who was to die in the pursuit of his art. Born William Ellsworth Robinson in 1861, Chung Ling Soo was an American of Scottish descent. His father was a vaudeville performer and young Billy followed him on to the stage with the magic and sleight of hand he had practised in front of a mirror as ‘Robinson, the Man of Mystery, The World’s Marvelous Enchanter.

He looked the part with his handlebar moustache, but despite his best efforts, the reviews of his act were not enthusiastic, even after he added ventriloquism and mind reading to his act, promoting himself as ‘Robinson, The Man of Many Voices’ and ‘The Famous Spiritualist’.

While touring Europe, Robinson was introduced to a new style of magic, Black Art Illusions, where black fabric and lighting is used to conceal objects and he brought this technique back to America, joining the shows of both Alexander Herrmann and Harry Kellar, bitter rivals on the vaudeville circuit. But it was in 1899 that Robinson began to reinvent himself as the mystery man from the Orient. He shaved off his moustache and hairline, wore a wig with a long pigtail, or queue, used make-up to change his skin tone and wore a costume he bought in Chinatown to become Hop Ling Soo. His assistant became a Chinese princess and he hired a real Chinese juggler to join his troupe.

He took his act to Europe on the invitation of a manager in France, but it did not start well. As Hop Ling Soo, he appeared on stage for the first time in 1900 and his act was too slow and deliberate, and then a trick involving a large bowl of water went completely wrong, spilling the contents into the orchestra pit and drenching the musicians.

Despite this setback, Robinson persisted with the act. He hated the name Hop Ling Soo and since he had already appropriated many of the tricks of the popular American magician, Ching Ling Foo, he stole his name too, becoming Chung Ling Soo for the next stop in London. It was a case of the right act at the right time and Chung Ling Soo became an instant success and he was soon earning $5,000 a week. He feigned to speak no English and gave newspaper interviews via his new Japanese juggler, Frank Kametaro, acting as ‘translator’ with Chung Ling Soo responding to the questions with Chinese-sounding gibberish.

But in 1904, Chung’s act stealing caught up with him. Ching Ling Foo arrived in London at the start of what he hoped would be a successful European tour, but booking’s were limited because of his competitor’s established popularity. He challenged Chung Ling Soo to a duel of magic to prove who was the real Chinese illusionist.

Failure could have meant the end of Chung’s Ling Soo’s career, but he had a trick up his sleeve in shape of his friend, Harry Houdini, who agreed to teach him one of his best illusions. Chung Ling Soo won the duel and from then on changed his publicity from ‘The Wonderful Chinese Conjurer‘ to ‘The Original Chinese Conjurer‘. Chung Ling Soo settled in London, his private life as colourful as his act, and it was in 1918 that his art failed him with fatal consequences when he added the notoriously dangerous bullet-catching trick to his repertoire, billing it as ‘Condemned to Death By the Boxers’.

There are various ways of performing this illusion and Chung Ling Soo’s preferred method was to have a blank discharged from the ramrod tube below the barrel, but the gun had not been cleaned properly and gunpowder residue was ignited, firing the real bullet. Chung Ling Soo staggered back, blood pouring from his chest, and he spoke English publicly on stage for the first and last time: ‘Oh my God. Something’s happened. Lower the curtain!’

A stage-hand pulled down a curtain to keep him warm and when a doctor arrived, he could barely find a pulse. The bullet had grazed his heart and broken a rib and though he was taken to hospital, Chung Ling Soo died two hours later.

The secret of the trick was revealed at the inquest so the jury could understand what had happened and after evidence from a gun expert, the coroner ruled that it was a case of ‘death by misadventure’.

If you have seen the film, The Prestige, you might recognise Chung Ling Soo as the Chinese magician whose secrets the protagonists set out to steal early in their careers. 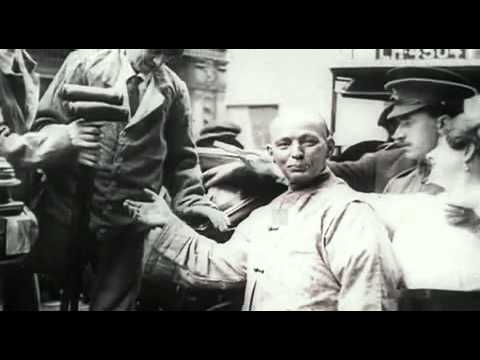 As mentioned above, Chung Ling Soo led a colourful public and private life and this post is but a summary. See the The Glorious Deception by the excellent Jim Steinmeyer for a comprehensive biography, or his entry on Forgotten Newsmakers, both sources for this post. I leave you with the only surviving footage of Chung Ling Soo greeting World War One veterans at a 1915 benefit performance.

You might also want to watch Boris Karloff’s ‘Who killed Chung Ling Soo’ video which maintains the conspiracy theory that it was in fact a most elaborate suicide.