I was on my blogging sabbatical when Jeremy Clarkson was sacked from Top Gear last year for throwing that punch he threw that left Oisin Tymon needing a trip to the local A&E department in his reasonably priced car.

And I was pretty cross. I know Clarkson isn’t everyone’s cup of tea, but I quite enjoy his journalism, even if I don’t necessarily agree with his politics.

Yes, his tantrum over the absence of a hot meal after a day’s filming was prima donna-ish and probably uncalled for, but then this is television, and BBC tv to boot, so aren’t they all a bunch of drama queens?

Of course, it was manna for all those who hate Clarkson – the environmentalists, right-ons and caravanists – and a wonderful opportunity to get him and his petrol burning cronies kicked off the telly once and for all. And the BBC, at its po-faced worst, duly obliged.

I’m guessing what they really wanted was an end to Top Gear polluting our Sunday night entertainment and replaced with something more intellectually stimulating, maybe more documentaries about how we are wrecking the planet, or yet another cookery programme, this one heavy on the lentils, or perhaps Zen and the Art of Cycling. But the BBC is a cunning beast – they may have thrown out the baby, but they are more than happy to recycle the bath water.

So Top Gear is to return and today we hear that Matt LeBlanc is to co-present the new look show alongside Chris Evans and The Stig and this has left me in a bit of a quandary. I had determined not to watch because that’ll show the BBC that my viewing affections are not to be trifled with, but I actually quite like LeBlanc.

I got to know him quite well in the noughties as Joey in Friends, not by choice I should add, but because the show seemed to be on endlessly when Miss P was at home. Then he turned up in the BBC comedy, Episodes, which was also pretty good, so had this been an entirely new programme I would probably have been watching. But I won’t.

I still think that the BBC were wrong to sack Clarkson & Co and so threaten both my viewing pleasure and their own worldwide syndication coffers and though I may be cutting off my nose to spite my face, I have resolved to skip the new look Top Gear. Especially as it seems that Evans can’t drive and talk at the same time. 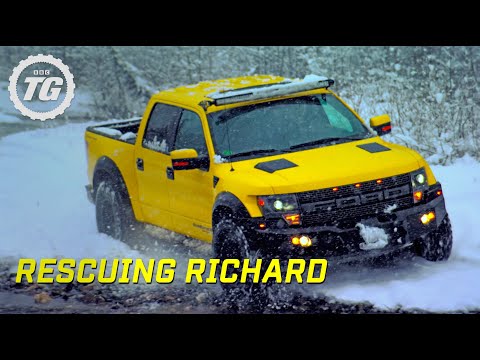 Plus I now have my Amazon Fire gizmo and so will have the original and still the greatest to watch instead.

It’s also an excuse to catch up with some video from previous episodes, this being Rescuing Richard From Lone Wolf Mountain from series 22.