I haven’t added much to the universal outpouring of sadness at the death of Muhammad Ali, apart from a short mention in my Sunday Round-up, mainly because others can do him justice better than I can, but I had to include a short post on something that passed me by at the time.

In 1978, DC comics published what must go down as the greatest fictional bout of all time – Muhammad Ali versus Superman.

In the story, Ali argues that Superman isn’t the true champion of the earth because he has never faced him and so a match between the two is made, taking place on the planet Bodace where Superman’s powers don’t work. Needless to say, Ali wins, proving that he is truly The Greatest. 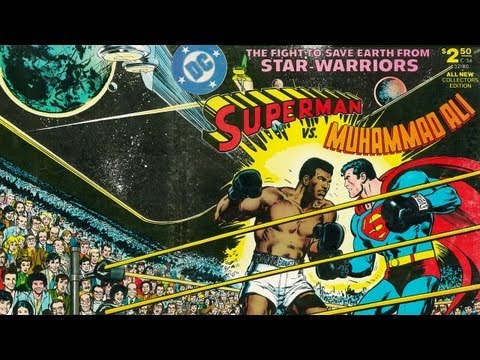 Quite a few other celebrities appear in the crowd, including Lucille Ball, Ron Howard, Donny and Marie Osmond, Frank Sinatra, plus Jimmy Carter and Gerald Ford and their wives. A few stars refused permission to have their likeness included, among them John Wayne, and you can see a full list here. Right is the story behind the story.