No Wonder Woman: There is one less woman in politics after Wonder Woman was sacked as an honorary UN ambassador.

She was meant to front a female empowerment campaign but an online petition complained that a ‘large-breasted, white woman of impossible proportions’ was not a suitable symbol of global equality. Well, I liked the idea.

Inconvenienced: A woman in Florida is suing Walgreens store claiming that her husband died of emotional distress after being forced to clean their bathroom, or lavatory as we say in the UK.

Mystery of the week: A mysterious object has been washed up on Auckland’s Muriwai Beach in New Zealand. The barnacle-covered object is so big that Melissa Doubleday who discovered it mistook it for a beached whale.

Quote of the week: ‘Prince Charles’s vocal chords are plainly trying to strangle him. He may well become the first monarch to lose his head from the inside out.’ – A. A. Gill who died last week.

Chilling quote of the week: ‘Be polite, be professional, but have a plan to kill everybody you meet.’ – General James ‘Mad Dog’ Mattis, America’s new defence secretary. And as the New Yorker’s Nicholas Thompson observes: ‘How many generals do you need in a government before you technically become a junta?’

Who killed Frosty? Jeff Diggs of St Louis, Minnesota (right), has set up a GoFundMe page to raise $1,000 to cover the medical expenses for Frosty the Snowman who was viciously attacked by a knife-wielding maniac.

Hot stuff: Wolves that attack family dogs in Finland are likely to get a blast of chilli powder in the face if a special vest works as planned.

Housebling: Not content with dressing the outside of their house for Christmas, a couple in Newport, South Wales, glitterify the inside as well and charge £2 to take a look. All proceeds go to charity and last year they raised £17,500.

Case dismissed: An Australian man who spent more than £1 million of a bank’s money has walked free from the court which found that he was not guilty of deception.

Get stuffed: Anthony Walls (right), aka the Human Pincushion with the Circus of Horrors, will continue with the show after his death by having his body preserved through taxidermy.

High fivers: After the hoo-ha from the vegetarian lobby over the use of animal fats in the new plastic £5 note, they might change their minds about handling them now that they know that there are four special notes out there that could be worth £50,000 each.

DIY post-truth defence: National Public Radio (NPR) has a useful guide on how to self-check ‘news’ for authenticity. (Hat-tip Roger)

Who ate all the pies? The world’s largest producer of mince pies is in Barnsley, South Yorkshire, churning out 720 of the sweetmeats every minute. 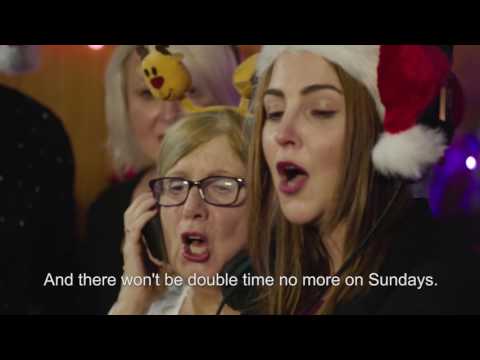 National living rage: I could easily poke fun at the Labour MPs who have released a song to the tune of Do They Know It’s Christmas but actually it highlights the scandalous employment practices of many high street companies. So I won’t.

Voodoo science: The Spiritual Science Research Foundation believes it has found the cause of homosexuality – apparently gay men are possessed by female ghosts and lesbians by male ghosts. And they prove it. No really, they’ve got proper pie charts and tables and everything.

Egged on: Carolyn Wignall of Huddersfield has a different take on the traditional Christmas tree by building hers from 1,000 egg boxes.

One small step: Sheffield-based SentIntoSpace launched the first meat and potato pie into space ahead of the World Pie Eating Championship in Wigan. The aim is to see if its journey up to 100,000ft changes the molecular structure of the pie making it quicker to eat.

Trump Queen: Someone on Instagram has posted a series of Photoshopped images superimposing Donald Trump’s face on the Queen’s body.

Trump grilled: Always prepared to take criticism on board, even Donald couldn’t keep his cool when Vanity Fair labelled the Trump Grill (or Grille) the worst restaurant in America.

What a purler: The most expensive Christmas jumper is on sale for just £24,000 which works out at £1 for each of the 24,000 Swarovski crystals sewn into it. (Then somebody has to go and beat it)

Got it licked: Moose in Alberta have got a taste for cars – quite literally. They like to lick the salt off cars in car parks but motorists are warned not to attempt to interfere.

Lick your lips: After KFC nail varnish and scented candles, Greggs the bakers are giving away festive lip balm, one flavoured with mince pie and the other with chicken breast, sage and onion stuffing and diced sweetcure bacon in a creamy sage sauce with cranberry and red onion relish and sweetened dried cranberries.

Let them eat houses: Lynn Nolan of Youlgrave in Derbyshire has created a model of the village in cake and in minute detail including tiny pint glasses on tables in the pub and hams hanging in the butcher’s shop.

Meanwhile, in the Swedish city of Malmö, the Anonymouse art collective has installed a mini-street scene for mice (left).