Sweethearts: The city of Loveland, Colorado, has been busy this week as the postal point for thousands of Valentine’s Day cards, including one headed for Donald Trump.

Meanwhile, an unidentified female aide at No10 fell for a hoax phone call saying that the Donald wanted to send Theresa May a bunch of her favourite flowers for Valentine’s Day.

If it all goes wrong for Donald and Theresa then I’m sure they will have lots of items to contribute to the Museum of Broken Relationships. 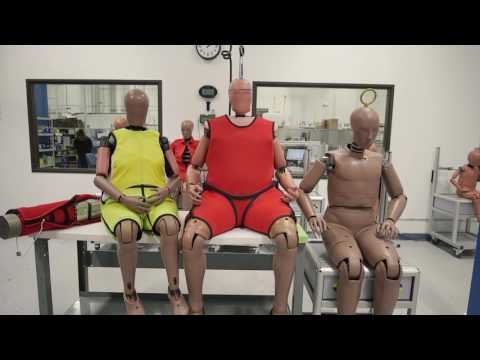 Heavyweight dummies: The original crash test dummies are being replaced with new ones that weigh up to 19-stones to reflect the growing number of obese drivers as you can see in the video on the right.

Double trouble: Alec Baldwin does a good impression of Donald Trump, so good in fact that a newspaper in the Dominican Republic mistakenly used a photo of the actor instead of the president.

Transcontinental dreamcoat: If you want to beat the airline’s luggage weight restriction, try this jacket marketed by an Australian company which can hold 15kg of extra items.

Just not punny: ‘I’ve perfected my technique for selecting my favourite letter of the alphabet. I’ve got it down to a T.’ Just one of the entries in this year’s UK Pun Championships.

Be a daredevil: Evel Knievel’s family is to auction one of his star-spangled jumpsuits and it could be yours if you have £60,000 to spare.

What a knit: Sam Barsky of Baltimore took up knitting in 1999 and since then has created sweaters inspired by famous landmarks that he then visits. You can see more of his work on his Facebook page.

Sacked symbol: The thimble has gone the way of the iron and has been sacked from the traditional Monopoly player symbols.

Dum-de-dum-de-dum-de-dum: This weekend saw the second academic conference on the long-running radio soap The Archers. Topics included a ‘sociological analysis of class dynamics in rural Britain through the lives of Archers’ characters’, ‘elderly care provision in the rural setting’ and ‘rural and village economics, from the village store to agribusiness’.

Creepy: Museums around the world have been sharing some their creepiest exhibits on Twitter under the hashtag Museum 101.

Signing: ‘The sixth sick sheik’s sixth sheep’s sick’ is supposed to be the hardest tongue-twister in English but I hadn’t realised that it is possible to have tongue twisters in sign language. They’re known as finger-fumblers.