What a gay day: It was International Drag Day on Sunday to celebrate drag artists across the planet and BBC weatherman Owain Wyn Evans got in on the act by including references to Ru Paul’s Drag Race in his forecast.

Put your feet up: A shopping mall in Shanghai has installed rest pods where wives can leave their bored husbands while they go shopping.

Can it: Retired banker Nick West is selling his collection of 9,000 empty beer cans after finally agreeing with his wife that his 40-year-old obsession had got out of hand.

Heaven sent: A politician in India has had tribal priests arrested after the prayers he paid them for failed to get him the ministerial post he felt he deserved.

Transparency: Donald Trump has decided that his wall between America and Mexico must be see-through so that officials on his side can avoid getting hit on the head by bags of drugs.

Underground design: Taipei Subway cars have been decorated to represent various sports venues to celebrate the city being the venue for the Summer Universiade Games in August.

Gone to pot: If you have the money and your taste runs to semi-legal highs then try handcrafted cannabis cigars from Leira which start at $110 for a quarter-inch cigarillo.

On heat: Women in China can buy mini-flamethrowers to ward off unwelcome advances. Marketed as the must-have ‘anti-pervert weapons’ they fit neatly inside a handbag. 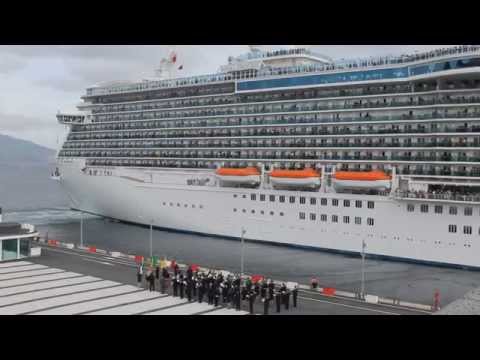 Love Boat:  Hat tip to the Danny Baker Show which featured the Royal Princess cruise liner which leaves port playing the most excruciating version of the Love Boat theme on its horns.

And if that sets your teeth on edge de-stress with this trailer for Baa Baa Land, an eight-hour epic about sheep.

Wrecked angle: Despite its spooky reputation, the Bermuda Triangle is no more risky to fly in than any other part of the world according to Australian Scientist Dr Karl Kruszelnicki.

Brief lives: Night of the Living Dead director George A Romero; Hollywood actor Martin Landau; the only woman to win the equivalent of the Nobel Prize for Mathematics Maryam Mirzakhani; Linkin Park lead singer Chester Bennington; Dr Who companion actress Deborah Watling ; pioneer of free-fall parachuting Lieutenant-Colonel Tom Ridgway who was once savaged by an Asbo cat; the Home Alone dad actor John Heard and Pudsey, the dog that won Britain’s Got Talent.