Spider-sense: Lifeboat men from Sunderland and Seaham Coastguard and a rescue helicopter were sent to rescue a parachutist who had landed in the sea only to find that it was actually a Spider-Man balloon.

Who’s been sleeping in my bed? Three bears broke into a pizza restaurant in Colorado but failed to find either porridge or Goldilocks.

Faking it: Donald Trump claims to have invented the word ‘fake’. He says he hasn’t noticed anyone else using it even though according to the Oxford Dictionary it has been around for more than two hundred years. 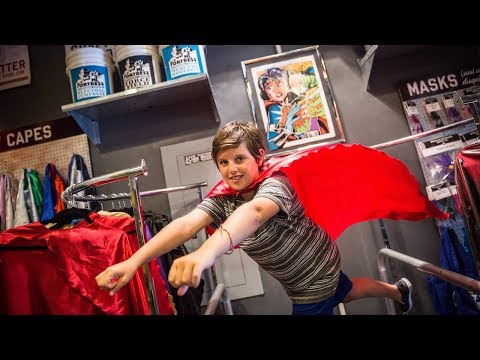 Even superheroes need to shop: Is your cape getting a little shabby? Are you in need of a new super-power? Then get along to the Brooklyn Superhero Supply Co which has a wind tunnel to test your cape’s suitability and a ‘devillainiser’ to remove impure thoughts. (All profits to educational charity 826NYC)

Rock-it man: It is hard to know how the modern man should behave with a member of the opposite sex these days and avoid accusations of sexual harassment.  The answer is to treat all women like you would treat Dwayne ‘The Rock’ Johnson.

Were Vikings Muslims? Scientists in Sweden have found Arabic characters woven into burial costumes from Viking boat graves that spell the words ‘Allah’ or ‘Ali’. I’m not sure what the members of the Viking Therapy Club would make of that.

Gunpowder plot: At the time of writing this, almost 5,000 people have signed an online petition to ban fireworks for November 5th.

Hangover free: Drug scientists and former government adviser, Professor David Nutt is planning to launch a range of synthetic alcohols which mimic the effects of booze without the hangover or liver damage.

Sole survivor: Which should have been the headline of the week after an angler is revived by paramedics after he attempted to kiss the Dover sole he’s caught only for it to leap down his throat.

Intolerance: Police in Austria take the burqa ban very seriously and arrested a man wearing a promotional shark outfit because he wouldn’t take off the head.

Be smart:  How clever do you think you are? Take the quickest test that uses just three questions to gauge your IQ.

Lucky for some: Another Friday 13th this week but far from being unlucky, it seems that the risk of misfortune lessens as our triskaidekaphobia makes us more careful than usual with the average insurance claim lower than for other days.

But I’m afraid that you’ve missed your chance to take flight 666 to HEL on Friday 13th which has operated between Copenhagen and Helsinki since 2006 but has now been retired by Finnair.