What a scream: An image of a screaming Donald Trump, produced for a 2016 advertising campaign for Der Tagesspiegel, has had a reworking on Reddit’s PhotoshopBattles thread.

A swan? Ah, go on: Researchers at the University of Singapore have developed robot swans to test the water in the country’s reservoirs as part of the aptly named Smart Water Assessment Network project.

From beyond the grave: A  woman in South Africa played a plant-watering prank on her husband long after she had died in 2013.

A serious issue: Back in December Donald Trump scrapped net-neutrality, effectively handing over control of the web to the big cable companies in the US. To show what this means, Burger King produced the video on the right using their Whopper burger as an analogy. What the US does today the world does tomorrow so sign the petition to save the net or read how at least one state is fighting back.

Riot spreads: A French supermarket chain slashed 70% off the price of Nutella sparking riots as shoppers fought one another to get their hands on as much of the nutty chocolatey spread as they could. 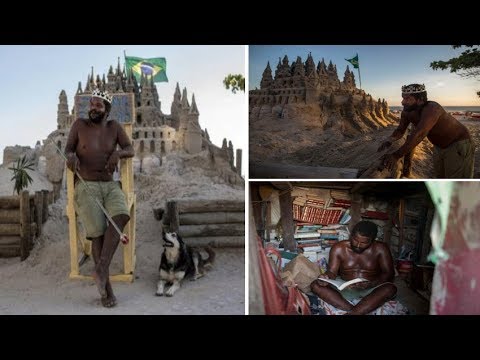 Beached: Meet Marcio Mizael Matolias (right), the king of the beach of Barra da Tijuca in Rio de Janeiro who has lived in a sand castle for the last 22 years.

Getting the hump: Twelve camels have been disqualified from the annual King Abdulaziz Camel Festival when it was discovered that they had cheated by having Botox injections.

Glitterball: Rocket Lab in New Zealand has launched the Humanity Star, a geodesic sphere with 65 highly reflective panels that reflect the sun’s rays back to Earth, visible to the naked eye. You can track its progress here.

Get him outta here: The latest ‘celebrity’ to be outed is Kiosk Keith who has been sacked from I’m a Celebrity Get Me Out of Here for inappropriate behaviour.

Vegans – look away now: It may still be Veganuary, but one Welsh farmer hasn’t really entered into the spirit of the thing by posting this photo of his or her breakfast.

A dictator dictates: Should you be wondering what to buy for whoever you care for as a Valentine’s Day gift, why not Zabida and the King, a romantic novel by that well-known chick lit author Saddam Hussein.

Career change: The man who played Barney the Dinosaur is now a tantric sex therapist in California.

Birthday of the week: Today is Lego’s 60th birthday and to mark the occasion the company has unveiled a 10-foot, 1,200-pound Lego brick made out of  133,000 other Legos in New York’s Flatiron Plaza.

Heartburn: Redesigning your brand can be a tricky business as Leeds United discovered when they launched a new club badge that their supporters say looks like a Gaviscon ad.

There’s no smoke… Australian scientists believe that birds like the whistling kite are weaponising fire by dropping burning embers on grassland to flush out prey.

The greatest gift that we possess: Attendees at a six-week ‘happiness course’ at a Cheshire hotel were anything but happy after they were landed with hundreds of pounds worth of parking fines. They may have been better off reading about the economics of happiness.

Decoded: Researchers have finally decoded one of the last remaining Dead Sea Scrolls which reveals important dates in the Qumran sect’s calendar that aren’t mentioned in the Bible but which are detailed elsewhere in the scrolls.

Insecurity: Airport security isn’t quite as tight as it’s cracked up to be after serial stowaway Marilyn Hartman yet again managed to sneak on board a plane to fly from Chicago to London without a ticket or a passport.

And one I missed from November 2017 – Mary Berners-Lee, mother of Tim and one of the world’s first freelance computer programmers in the 1950s.