Cereal fix: East Ayrshire Council may have tripled its budget to repair road potholes but is still using Coco Pops as a temporary fix. I think someone may be having a laugh.

Snail’s pace: The cold snap put an end to the annual Snail Racing Championship at the Dartmoor Union pub because the ‘competitors’ have gone into hibernation.

Discovery of the week: A while ago, I jokingly wondered whether the word meme should be pronounced ‘meem’ or ‘me-me’ but now I know the answer. It is definitively ‘meem’ and was coined by Richard Dawkins in 1976 and is short for the ancient Greek word ‘mimeme’ meaning an imitated thing. 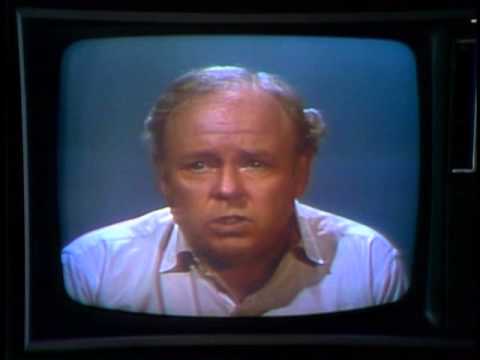 Bunker mentality: The notion that arming teachers will make American schools less of a target for madmen must be good because more guns equal less crime right? No so – that idea was totally discredited years ago. And yet it seems that a certain President is taking a leaf out of Archie Bunker’s book as you can see on the right.

All shook up: Libertarian candidate Elvis Presley is running for Congress in  Little Rock, Arkansas.

FCK: When KFC shut its outlets because of a lack of chicken, it was very much a PR disaster but the company’s tongue-in-cheek response was a ‘masterclass in crisis management’.

Mind you, it was undoubtedly a serious situation for some and even caused one man to phone 999 to complain that he has had to go to Burger King instead.

Smelly socks brigade: The more right-wing your politics, the less likely you are to tolerate bodily odours or Body Odour Disgust Sensitivity (BODS) as the psychologists call it.