Dreaming of a White House Christmas

Melania Trump has decorated the White House in typically understated style but what on earth are the red trees about? It looks like a weird Dr Who set.

Two lost episodes of the Morecambe and Wise from 1968 have turned up in a derelict cinema in Sierra Leone.

Edinburgh Council has banned the fad for ‘silent discos’ because they are too noisy. 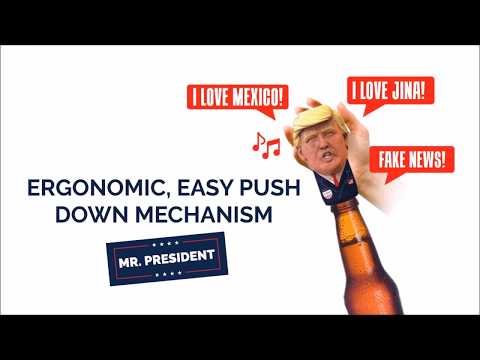 As usual, at this time of year, I have some gift ideas for you. Like the Donald Trump talking bottle opener that you can see in action on the right.

Or how about the President Predicto – Donald Trump Fortune Teller Ball. Or a ‘Make Christmas Great Again’ jumper.

And for the woman in your life, here’s a pair of glittery Christmas pudding boobs.

Or if you’re interested in music memorabilia then how about the mixing console used by Led Zepplin, Bob Marley and David Bowie.

But is it art?

The painting of the Republican Club seen hanging in the White House recently has been reimagined by artist Michael D’Antuono.

Not so sweet dreams

If it seems that I’m obsessed by Trump then I’m not alone. New York psychotherapist Martha Crawford has collected more than 3,000 examples of other people’s dreams and nightmares that involve the Orange One for her 45 Dreams project.

To get us into the festive spirit, the Post Office has installed singing postboxes that play a tune as you post your Christmas cards. Sadly, they are only available in London, Cardiff, Edinburgh and Belfast.

A cow called Knickers has been saved from being turned into hamburgers because he’s simply too big to go to the abattoir.

Archaeology students at Cambridge University have made the first film featuring the long-dead language of Babylon.

A giant inflatable Santa caused chaos in Wisbech when it broke free of its moorings and blocked a road for several hours.

If you’ve ever wondered what it must be like to be trampled by elephants, the video below from the MalaMala Game Reserve in South Africa will give you an idea. The amazing thing is how light the charging elephants are on their feet.

And the wonderful Baroness Trumpington who I had the pleasure to meet through my work in the NHS in the mid-1980s.